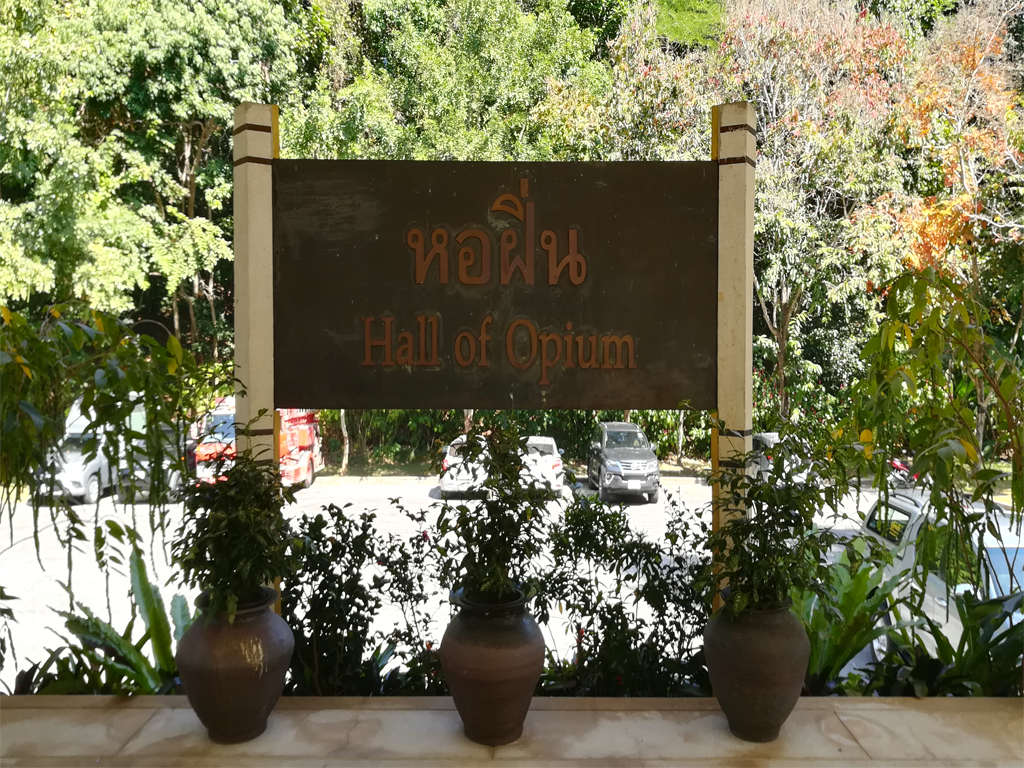 Hall of Opium is a place to show the background stories of opium. Starting from natural science, ancient usage of the opium poppy 5,000 years ago, historical assimilating of the opium from imperialistic trade, the opium wars that resulted China in the end of Qing dynasty, and the brilliant confrontation of Thailand with Western colony to the problem-solving of opium addiction in daily life with magical medication form. The hall also presents the opium contract, law regulations about the opium and associated organizations which take part in resolving conflict and crime. Moreover, there are destructive drawbacks of drugs addiction, preventive and controlled measure for drugs, and alternative case studies provided for drugs addicted to fight against drugs addiction. The opium hall at the same time exhibits the equipment of drugs consuming, drugs selling, and video presentation of drugs history worldwide.

The background of the opium hall in the Golden Triangle is where Thailand, Laos, Myanmar, as well as Ruak River and Mae Khong River are connected. In addition, this area used to have opium planting, heroine manufacturing and smuggling drugs all over the place. When people hear the word “Golden Triangle”, most of them may think of the opium poppy, hill tribes, foggy mountains, Mae Khong River or the picture of mix deciduous forest. However, the most enduring background will be images of opium and heroin planting or smuggling drugs. Furthermore, there were civil wars, the fight between soldiers and drugs smugglers, poverty, and heroin producing purge where more than half of the world’s heroin were from the Golden Triangle.

The Golden Triangle is the root of crime and illegal actions in Asia continent which were spread to Africa, Europe, and United States. Every year, there will be almost 100,000 tourists who come here only to visit the Golden Triangle. In 1988, Somdet Phra Srinagarindra Boromarajajonani or the Royal Grandmother started Doi Tung Development Project in Thailand. The project was aimed to achieve reforestation and improve quality of life for local people around Doi Nang Non along with prevent opium planting and consuming in this area. Few years later, Somdet Phra Srinagarindra Boromarajajonani set up Educational Improvement Project for citizens about historical study of the opium both in Golden Triangle area and around the world in order to raise the awareness in drugs resisting campaign to understand deadly outcomes of drugs in local, national, and international scales. As a result, these projects of Her Majesty finally continued to opium hall establishment at the end.

The Opium Hall has 250 square meters and is located 10 kilometers away from Amphoe Chiang Saen, surrounded with beautiful and stunning gardens. Additionally, it is an exhibition hall to perform illegal historical usage of opium in the past and dangerous consequences of the opium, also to be the learning center of opium researches in terms of opium and other drugs’ forms and extracts. 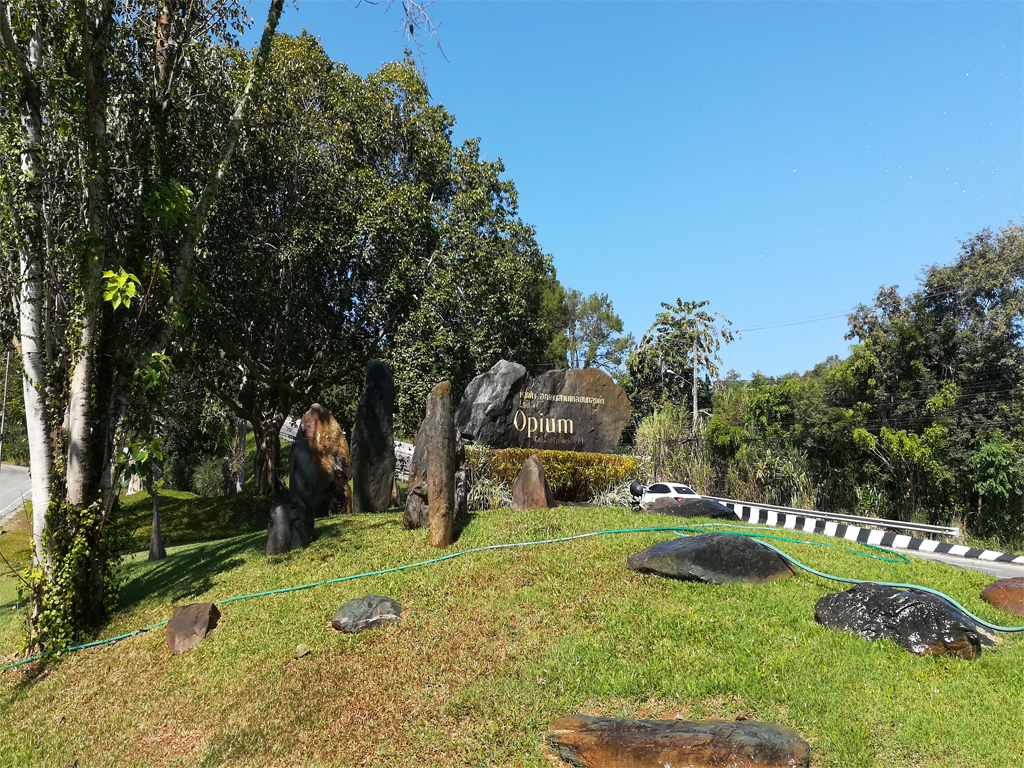 Exhibition in Hall of Opium

“TUNNEL”à The exhibition begins at the darkened and mysterious tunnel with 137 meters long which was pierced through the mountain from the reception hall to the brighter and airier opium field demonstrated auditorium on the other side.

“LOBBY”à You will be able to see the opium field demonstration and learn fundamental knowledge about every species of the poppy both flowers and industrial types which its resin can be generated as medication. Apart from the demonstration, there are growing process of the opium in every phase, including drying methods of the poppies to make ornamental plants.

“THE FIRST 5,000 YEARS” à While walking, you will get to walk through a long and attractive story of the opium. It is started from where the opium was from, there was evidence mentioned that the opium was first formed in Mediterranean area and first found in Switzerland. There were also written evidence in Sumerian medical textbooks, ancient Greek religion, as well as the verification of Mo and Egypt that had used the opium for ineffective medication in a long period of time.

“LIGHT AND DARK HALLWAY” à Two sides of the hallway were connected to reflect the pros and cons of the opium usage. Advantages are the use from its extract that can be applied for curing and soothing physical pain, such as, bakery, decorated flowers, or other products from the poppies. Disadvantages are that a person will be suffered from physical and mental addiction as we can see those using syringes and having unhealthy external appearance.

“FROM WEST TO EAST ”à The visitors would step to the age of the European and Asian trading afterwards, consequently, people will learn how opium became business and addicting drugs across-the-board by exhibiting British commercial port to silk fabrics, Porcelain, spices, and wrapping tea leaves which are Eastern and British cultural products and are the significant factors of why Britain had a trade deficit that almost led to a great loss, following, from Britain, the ship would take you to India supplementary to visit the opium factory. Then, the ship would stop at Singapore for adding foodstuffs and transferring goods to smaller ships and deliver to South East Asia harbors, such as Song Kla and Chanthaburi province. Therefore, Singapore had developed into a trading center between India and China, before carrying the story of the opium to China, where the harbor is the key of Cantonese.

“OPIUM WARS”à The exhibition will lead you to the conflict called “Opium Wars”, when Britain forced China to open their country for free trade agreement. In 1900, more than 13 million Chinese were addicted to drugs taking from the opium, China was therefore destructed domestically and dynastically, Qing dynasty, at that time, also in collapsing condition. This exhibition will tell you the whole significant situations result China in the most massive change in the Chinese history by displaying artificial models of their important persons both of China and Britain that directly involved with the opium wars. The next room will be three critical incidents, which are opium demolition at Hu Men by a governor, Lin Zexu, Yuang Ming incineration that was the 150 year-old summer palace, deprivation of human rights and consequences of Chinese people’s living after the war.

“OPIUM IN SIAM”à Once you step in, you will clearly see the Ratanakosin pagoda stands conspicuously at the city entrance. There is a demonstration of the teahouse of China Town with two robots lying down, smoking the opium, and the background of the opium in Siam or Thailand. Even though the opium is not originated in Thailand, to begin with, there still is some evidence assuring that Thai people have recognized the opium for a long time since King Rama I to III. Opium prohibition act in selling and smoking still has been being applied continuously. The situation of the opium usage in Thailand has changed after Britain won the opium wars over China. The other side of the room also examples rare items, such as, opium weights, opium boxes, pillows and so on, including opium braising presentation area and the Buddha statue from opium boxes casting.

“MEDICAL MARVELS”à Hereafter, the tourists will get to know the scientific revolution of the West that led to morphine dissolution, heroin revolution, and heroin injection beneath the skin of Western people which mostly used for soothing pain, sometimes, other forms or drugs are included. 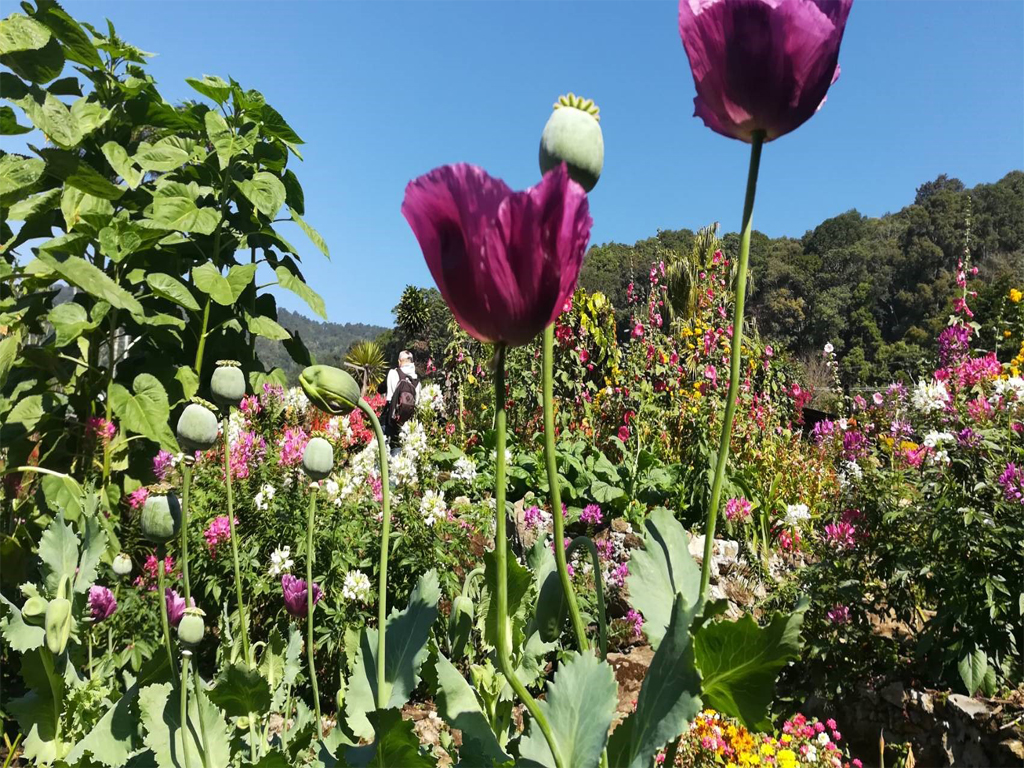