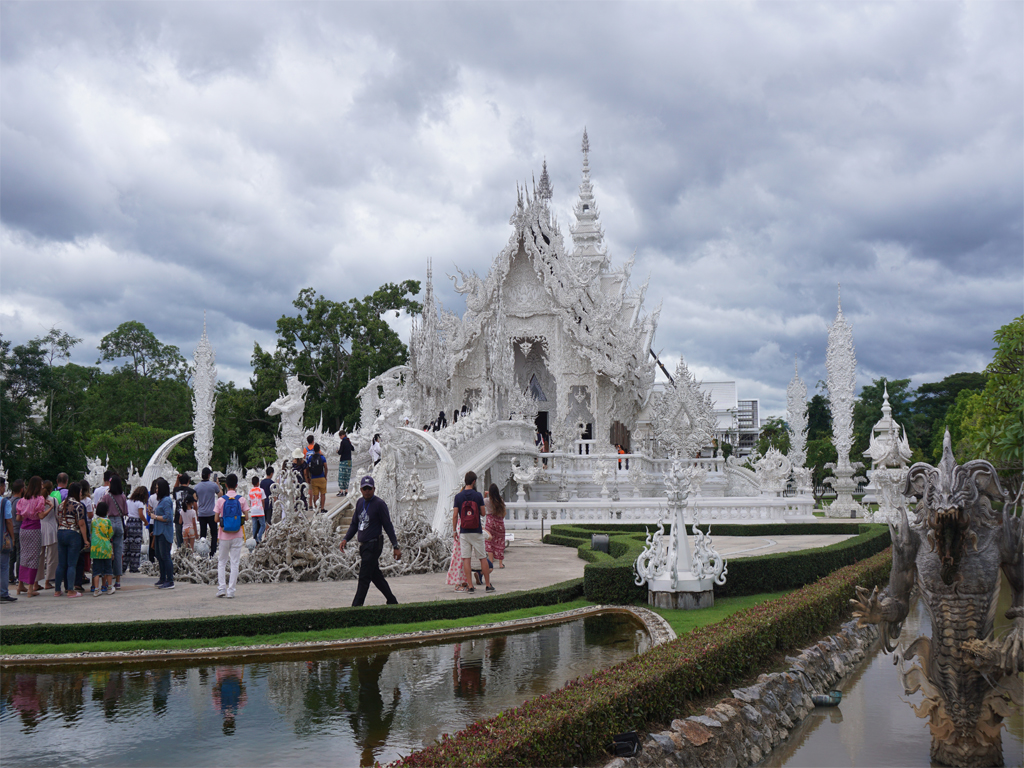 Wat Rong Khun is in Amphoe Mueang, Chiang Rai. The temple is originated from Ming Mueang Temple in Nan province. It has designed and constructed by Prof. Chalermchai Khositpipat since 1997 onwards. In addition, It is predicted that the construction will not end in Prof. Chalermchai era.

On 5th May 2014, 6.05 p.m., there was a 6.3 earthquake, centered in Mae Lao, Chiang Rai and many aftershocks result the temple in serious damages, such as, walls, tiles, the top of the pagoda, and drawing. Therefore, the temple had to close for reparation on 6th May in the same year.

Wat Rong Khun is located in Pha Aor Dhon Chai district, Amphoe Mueang, Chiang Rai, which is one of most significant temples in Chiang Rai since the temple was constructed by Prof. Chalermchai, a famous painter who was promoted and awarded to be the national artist, majoring in painting in 2011. He has dedicated himself to build the stunning White Temple for worshiping Buddhism and determining to create an authentic heaven on earth, portrayed by the architecting design to encourage people to do good deeds while living their lives. 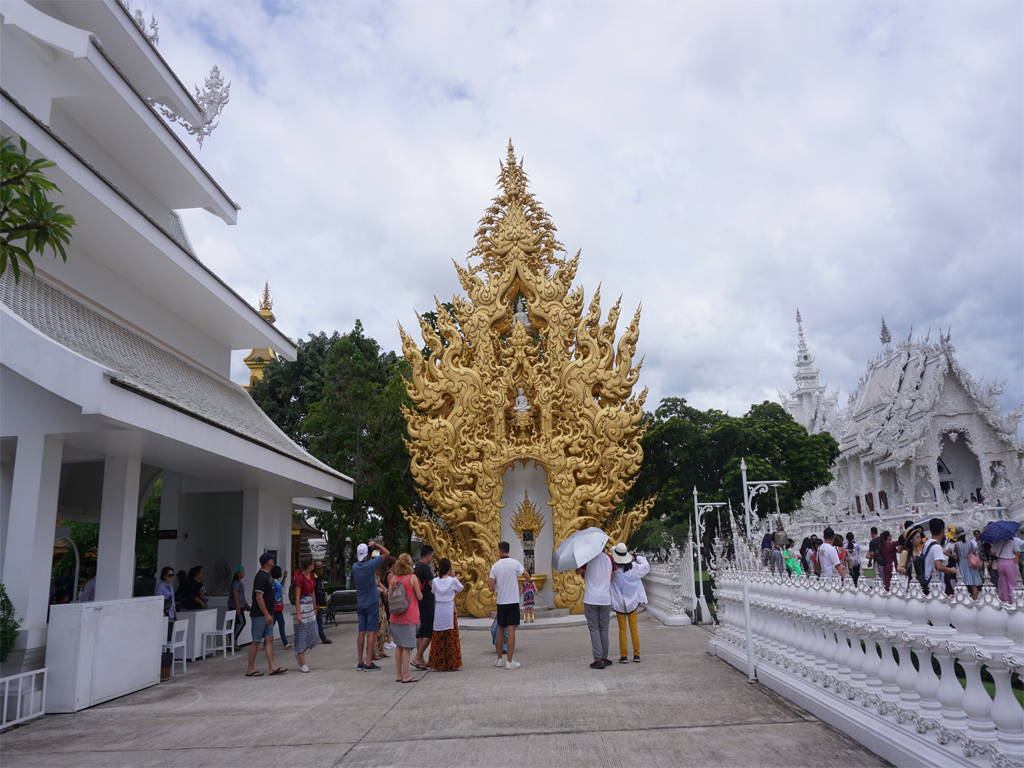 Once Prof. Chalermchai came back to the village, he saw that the original White Temple which was built in his older generation was left dilapidated; therefore, he was motivated to renovate The White Temple under the era of King Rama IX. Additionally, he wanted to use his skills to build the valuable temple as national property for Thailand. Thus, he had devoted himself to construct the temple for 20 years with his own budget from selling artworks.

Moreover, Prof. Chalermchai exposed his mind that “I expected that my unique Buddhistic arts will be remembered to people all over the world, to show the greatness of Thailand which I am very proud of. If I die, my students will continue my intention till the end. I have already prepared for my death. The temple I built wasn’t for any other purpose but my own faith.”

He also stated that “This temple has never do the annual robe offered to the monks who dwelled in the monastery, never built in a hurry for any celebration. The only thing I concerned is I have to build this temple with the utmost of my skills, to be the best temple. The only thing that would be able to stop me is the death.” 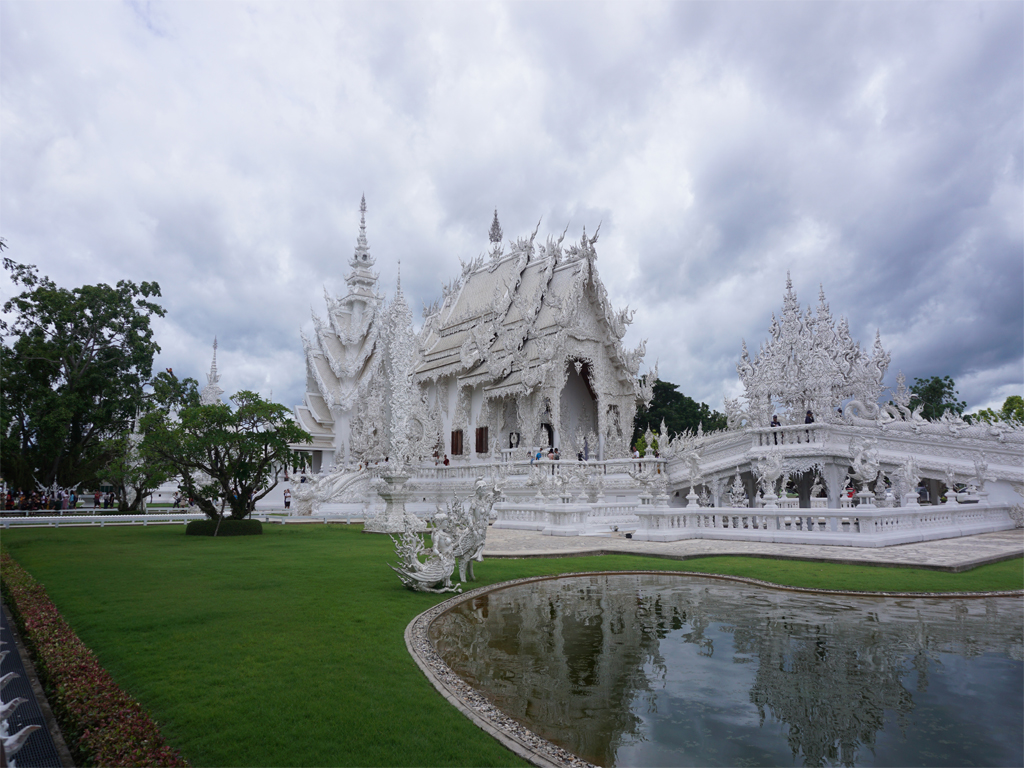 The most capturing when you visit Wat Rong Khun is the “ubosot” that is outstanding in arts and architecture, catches all eyes of the tourists. Not only the Gabel apex or the ornamental roof point, but also the pure white color that shows the cleanliness of Buddha’s grace, shines brightly like no other temple.

The bridge separates the path between human and Buddha world. The small circle refers to the human world and the bigger one with fangs of the Rahul refers to endless human desires that would be burned in the mouth of the Rahul for cleaning their minds before walking to the other side. The top of the ubosot shows the precepts, concentration, and wisdom that lead to salvation.

The second-level of the Gabel apex (above) means concentration, it is symbolized with two kinds of animals which are The Great Naga and The Swan. The Naga specifies the wickedness in humans, in contrast, The Swan pointes out the goodness that the Buddha’s precepts are the weapon to eliminate the bad things (desires). To explain, when our minds are serene and clear, the wisdom would come right after. The third-level of the Gabel apex (top) refers to the intellect, but replacing the swan with the Garuda’s mouth that indicates the peacefulness from eliminating internal desires. Behind the third-level of the Gabel apex, there are 7 artworks of 7 enlightenment factors, 8 pieces to support the silver and golden umbrella refer to the Noble Eightfold Path which is the nirvana, including the designs on the highest level of the roof that attributes the Palivision: The 10 Fetters. Four corners of the poles next to the ubosot are Lanna flags for worshiping to the Buddha as Lanna’s principles mentioned.

Furthermore, there is a magnificent wall painting from Prof. Chalermchai which is a must to see for the visitors inside the ubosot. All four sides of the wall are drawn with golden color, ceilings and floors are the drawing that shows the release of the desires to the dharma which releases one from the world. Lastly, the roof of the ubosot is created with the idea of 3 main meditation principles; the precepts, concentration, and wisdom.

Baan Dam or Black House Museum is located in Nang Lae District, Amphoe Mueang, Chiang Rai Province. It is constructed by Prof. Thawan Duchanee, a national artist who is an expert in painting and sculpturing. The appearance of Baan Dam is a village-like community, originated from Lanna architecture and all houses are painted with black color which is the Prof. Thawan’s favorite and also the ideal of the name “Baan Dam” or Black House Museum. 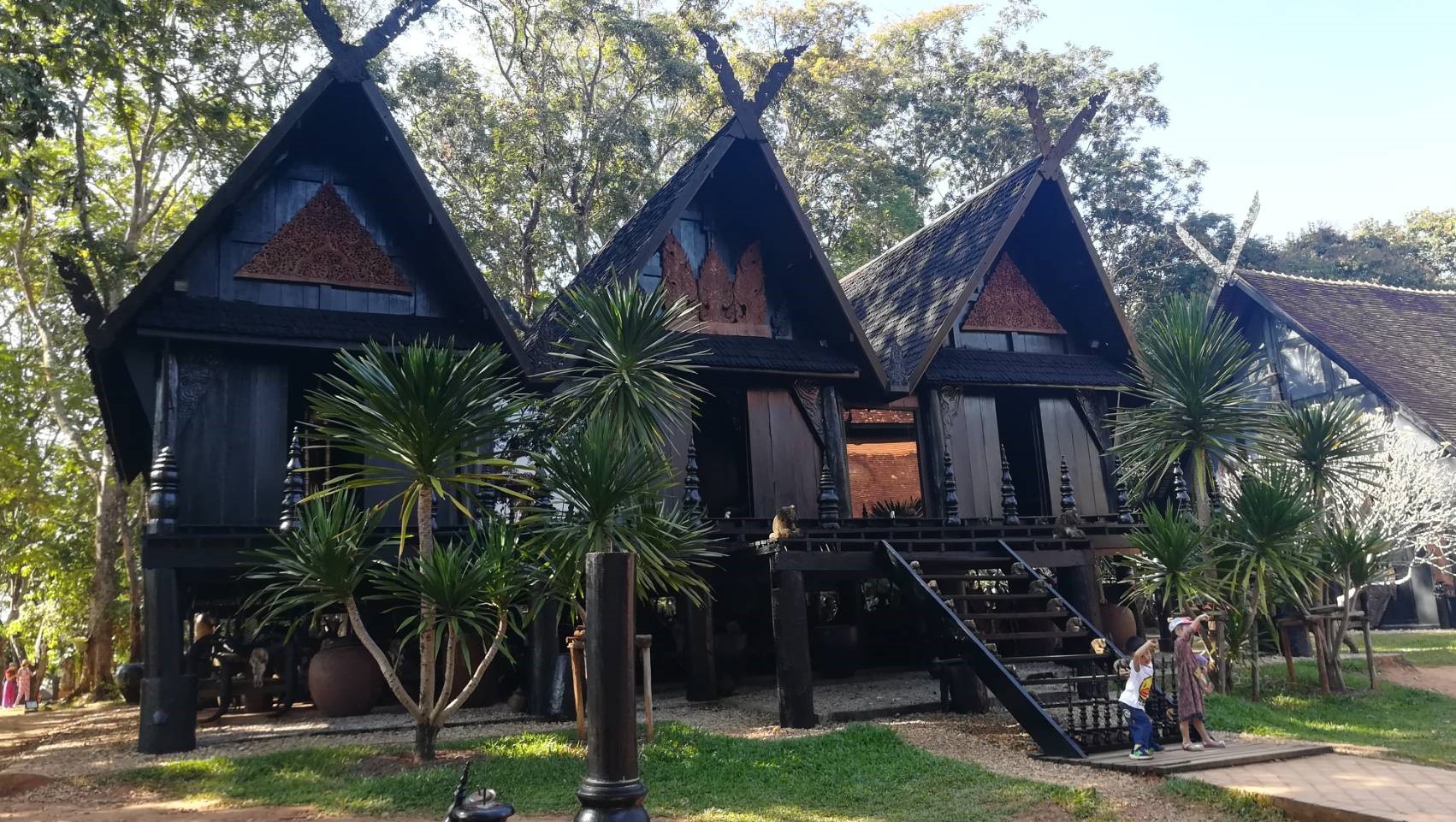 Every house is decorated with beautiful and delicate woodcuts and animal remains, such as, buffalo horns, antlers, and animal bones, like elephant bones and so on. Even though Prof. Thawan had passed away, Baan Dam or Black House Museum is still opened for the tourists to come visit the unique and outstanding beauty. 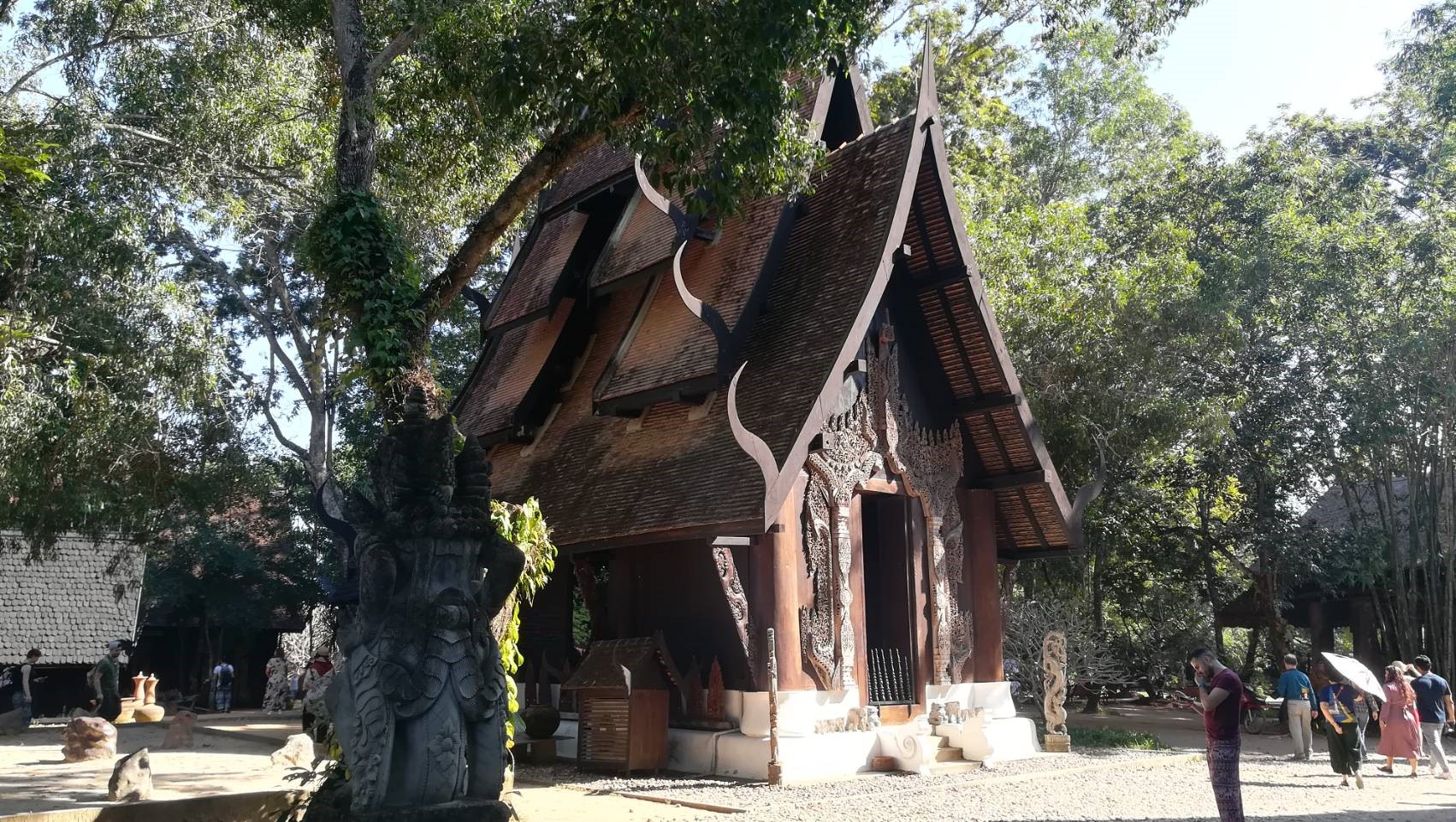 The black houses in the museum are surrounded with a plenty of trees, serene atmosphere, and all the 36 houses are differentiated from one another. These houses are not built for living, but for conserving the collections of Prof. Thawan. Additionally, there is another house that is on process of constructing, which is the museum of the exhibition of Prof. Thawan’s artworks and collections. The museum is made of teakwood with woodcuts decoration.  Baan Dam or Black House Museum is considered one of the most valuable and conservative tourist attractions in Thailand, as the museum has several distinctive and worthy Lanna artworks. In fact, Chiang Rai also has Wat Rong Khun (The White Temple), that the whole temple is painted with white color as if the tourists visit the heaven. Therefore, there is a comparison that the artworks of Prof. Thawan are hell-like artworks because they have black colors, contrastive to The White Temple of Prof. Chalermchai. 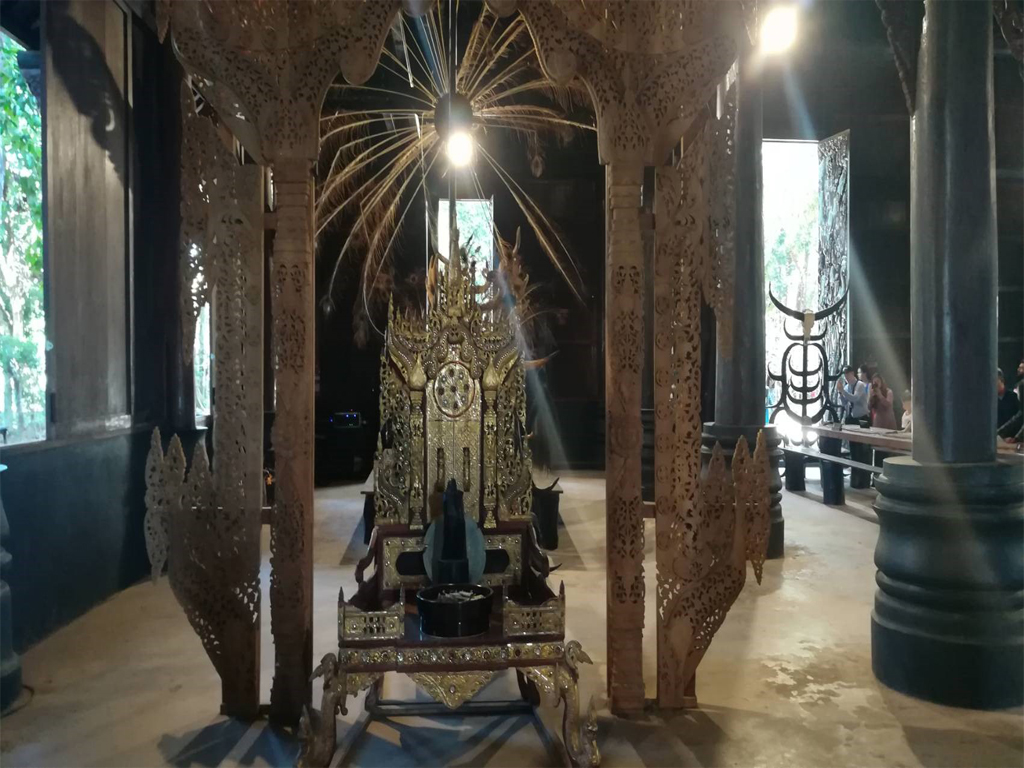 Prof. Thawan answered this issue that “It is just only the comparison, because my works are painted with black, which referred to hell and theirs are white like heaven. Baan Dam is not a hell-like architecture, the people here call it Baan Dam Nang Lae that only have black color. That is why most of the people are trying to compare my works to theirs.” 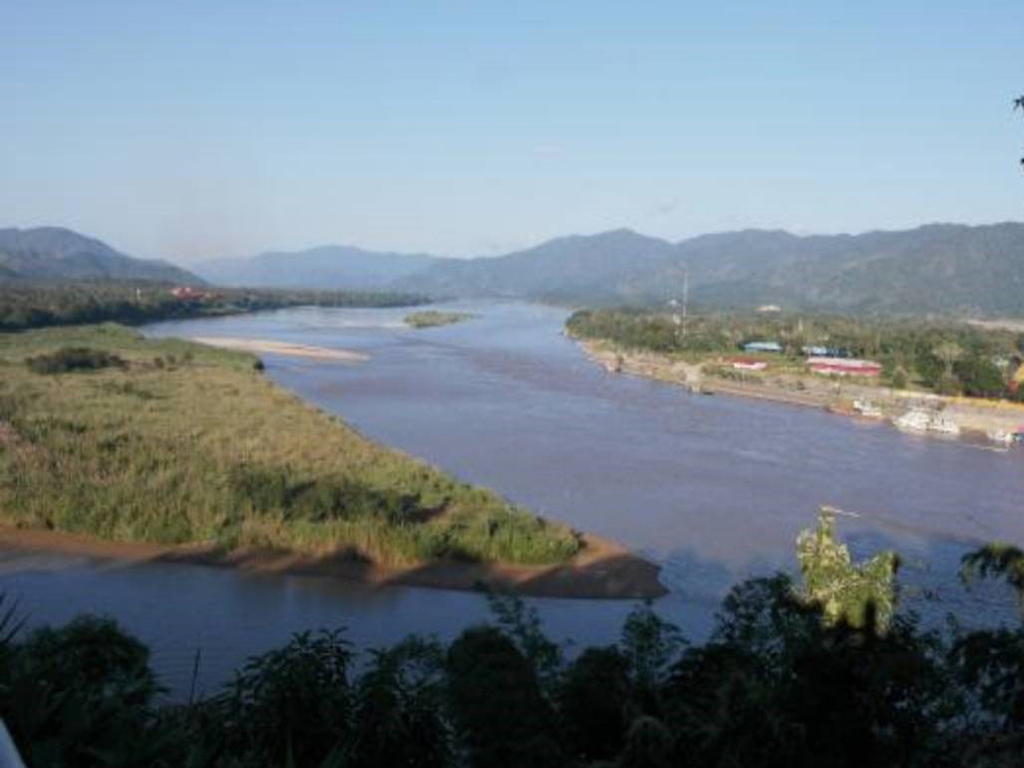 Golden Triangle means connecting areas between three countries, Thailand (Chiang Rai), Laos (Boh Kaew district), and Myanmar (Tah Khee lek, Chan), separated by Mae Khong River along Thailad and Laos’s frontiers. Golden Triangle is one of the significant areas for economic growth in this region. Moreover, Golden Triangle also has a captivating view, especially, at dawn when the sun rises through the sea of fog. Initially, Golden Triangle is a well-known word for visitors as a boundary area for tourist attraction. Nowadays, it is known for an important economic place since it is one of good transferring spaces in Thailand.

Golden Triangle in Thai border is located in Sob Ruak villege, Amphoe Chiang Saen, Chiang Rai with a small harbor for shipping products to Laos and China. When looking from Thai coast to the Northern East, we will obviously see the village in Laos’s frontier; however, we can rarely notice the village of Myanmar from the West.

The aforementioned area is also the joint between Mae Khong River and Ruak River, called “Sob Ruak”. This area used to have many ethnic minorities and armed force. It was the place of illegal opium planting and producing drugs. There were heroin factories all over the boundary, smuggling by mountain slope with body guards. It is told that the drugs and opium will be exchanged with gold in the same weight. Therefore, these are the backgrounds of the name “Golden Triangle”. 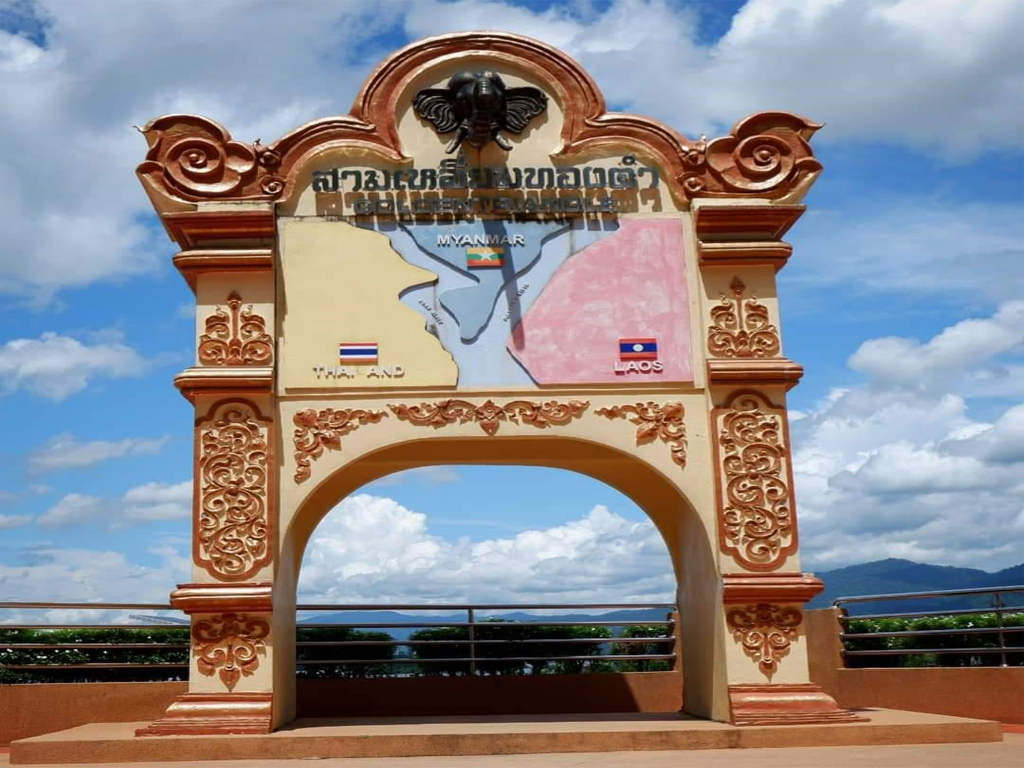 The route of the boat riding can last to South of China, Xishuangbanna and Kunming. However, if visitors would like to see wide-angle scenery, they must go up to Doi Chiang Miang at Mae Khong’s riverside.

Golden Triangle is based 9 kilometers away in the North from Chiang Saen. Sob Ruak district in Chiang Saen is where Mae Khong River separated Thailand and Laos, joint to Ruak River to isolate Thailand and Myanmar’s frontiers. From this position, you will be able to see Myanmar and Laos clearly in the opposite. It is believed that the area around Golden Triangle is popular in being former biggest world opium planting fields. Nevertheless, at present, there is no longer opium planting; only peaceful scenery of three countries is remained. Folklore about the original background of the Golden Triangle was that after Myanmar became one of the British colonies, Myanmar products were silk fabrics, Chinese goods, and brass pans. Opium was used to exchange stocks from Laos, such as, silk, gold leaves, and gold ornament. To do so, Laos’s merchants have to travel all the way to Ban Pah Sak, Mueang Pong district in Myanmar which is located in the North of Sob Ruak village. Annually, there would be goods trading approximately 4-5 times, it therefore made Sak Klay village became flourish area on the occasion because gold interchanged the business around here, which is why local people named this area “Golden Triangle”. 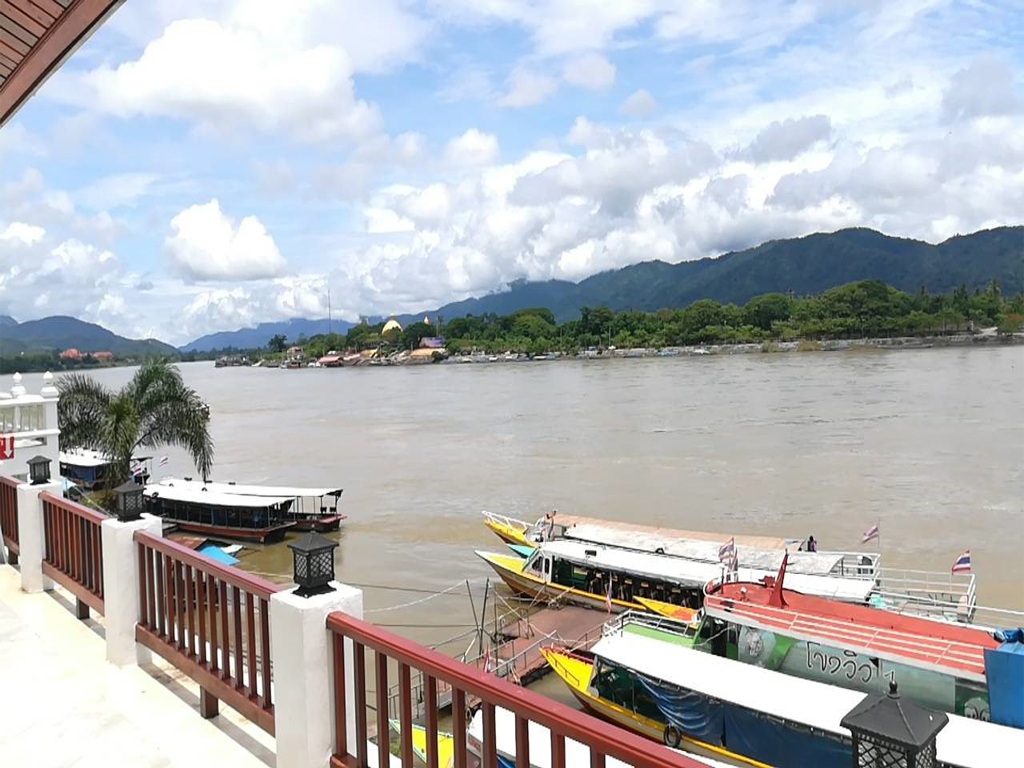 Activities around the Golden Triangle

Most of the tourists enjoy seeing the scenic point where the borders of Thailand, Laos, and Myanmar are connected. There are several harbors provided for tourists. If you want to travel from Mae Khong River to Chiang Saen and Chiang Khong, you can rent the boat from nearby sea port depends on how long the distance is and what tourist attractions you are interested in. The last station can be Southern China, like Xishuangbanna and Kunming. To make a plan, you can contact with travel agencies in Chiang Rai. 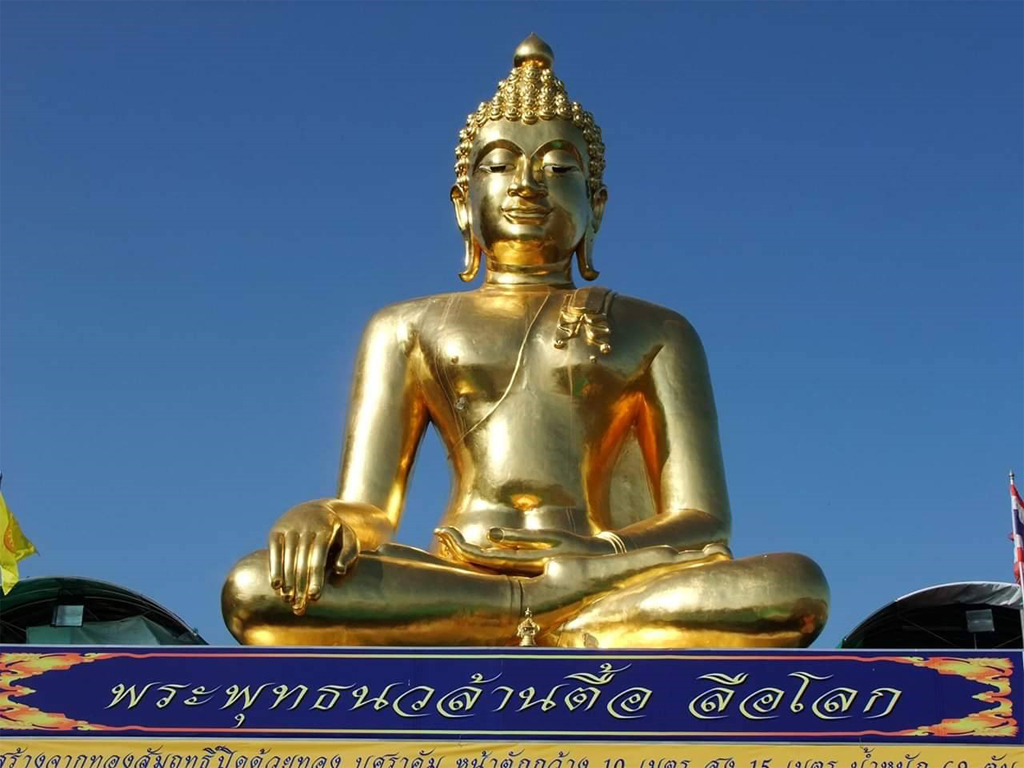 After arrived at the Golden Triangle, it is a must to take photos with the door facade of this tourist attraction with Mae Khong River as a background.